It all starts with a sketch... 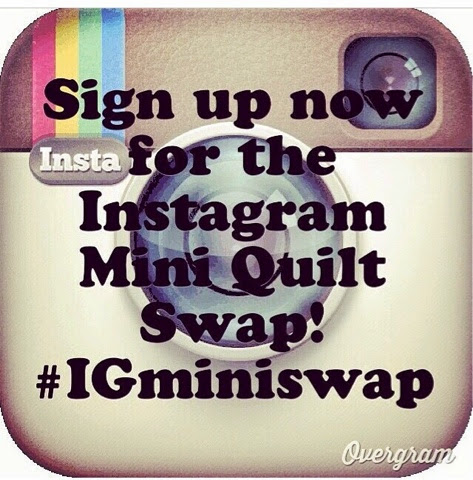 After returning from my trip to England/France, I immediately came down with the dreaded 'flu' that I'd managed to dodge prior to going. So with a few days on the couch, (yes I can't believe it myself, no sewing) I was able to start perusing the likes of a secret swap person I have been partnered with on Instagram. Thanks to Sandy whose organised it all, this mini swap is only mini in the size of what's being swapped. Up to 24 inches. The number originally planned for this swap was 100. With the participants now numbered over 500, it's a mini mega swap, that's going to be a huge amount of fun as it unfolds!! 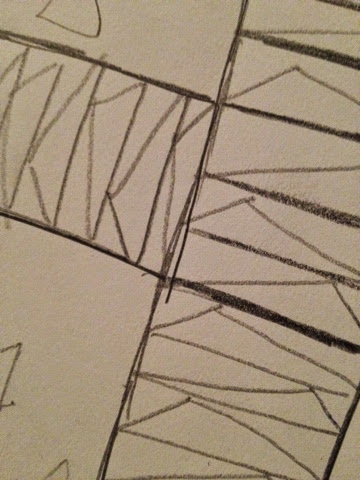 My swap partner, (who I'm secretly stalking, because you need to, if you want to make something they will like)  has a bit of a thing for flying geese. I confess, I do too, especially paper pieced ones. So with this in mind, I sketched up a rough (very rough, drawing is not my fortè) design. Then I tweaked it. My EQ program finally came into it's own, with providing the pattern precisely on paper that I'll be working from. It's not due until the first week in December, but with plenty of sewing and quilting to catch up on, thought I'd get started on it. Now to go find colours in her chosen colour palette.
Happy sewing!
Posted by Heritage Keepsakes on Friday, August 29, 2014 0 comments 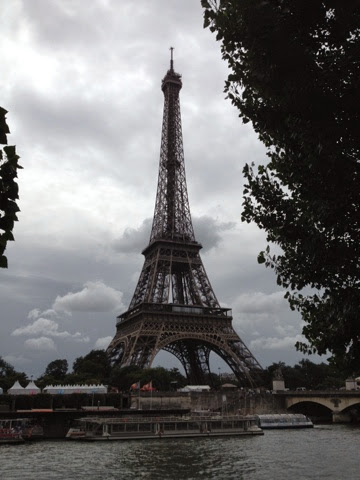 It would be a fair call at this point to say I've been a slack blogger. The reason being, I've found IG quicker to post pictures and concise entires, into what I've been doing. But I thought I'd touch base here, so you know I have not been totally idle.
I'm currently on vacation in France, having been to Festival of Quilts in Birmingham, England last week. So at this point, I'm in the last days of my holiday. I must say, I've seen so much design inspiration while in France, I'm surprised I have not seen more french quilts. Our tour guide at the Louvre did show me some lovely boutis she was working on. After sceptically asking me, "do you know what boutis is?", (hello.... of course I do ... It's the LABOUR INTENSIVE old method of trapunto!!) she showed me, after she realised I knew what she was talking about. Still prefer the newer way of doing it! 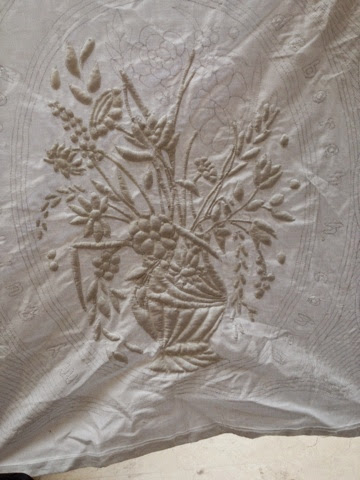 My absolute highlight of the Louvre, was not the boutis (which was good) but was the "Winged Victory of Somathrace". I have admired this statue ever since I saw a photo of it over 2 years ago. The way the carver has made the marble look like fabric folds blowing in the wind, is mind blowing. It is truly beautiful. 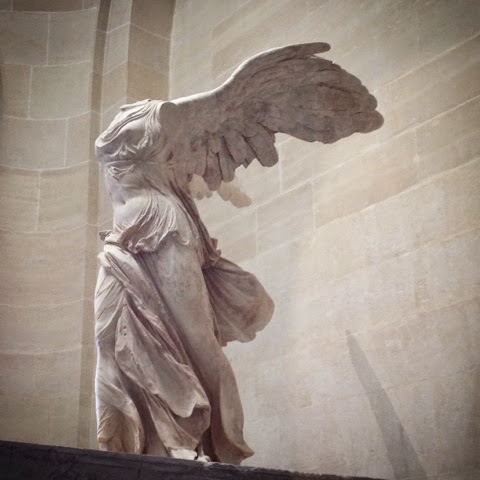 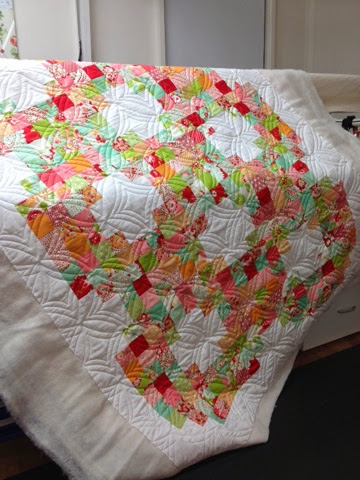 It seams like an age (and it probably is) since I've posted to my blog. I've been busy sewing up a storm at this end, so it's kept me fairly submerged!! This is one of those occasions I thought I should come up for air, so to speak, and visit my own blog.
This is Sylvia's quilt. It's the Daisy Chain pattern, from one of the Jelly Roll books. I've counted that I've made this quilt pattern now 5 times! Yes, I'm looking at changing that up a bit, in the coming months. As I really love the quilting process the most, making up a client quilt from scratch, does make the whole process take that bit longer, but the results have been worth it. 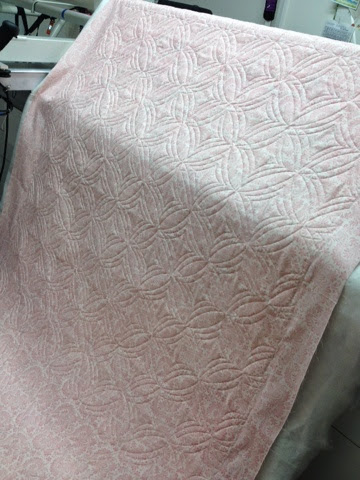 The quilting added a beautiful texture and ended up quite complimentary to the piecing. From memory, I think the quilting design was called Diamonds are Forever. The quilt was bound and handed over to a very delighted Sylvia last week and she just loves it!
Until the next time I post, which I hope is sooner rather than later, enjoy your sewing!-Julie.
Posted by Heritage Keepsakes on Sunday, June 01, 2014 4 comments

Lancaster completed and handed over. 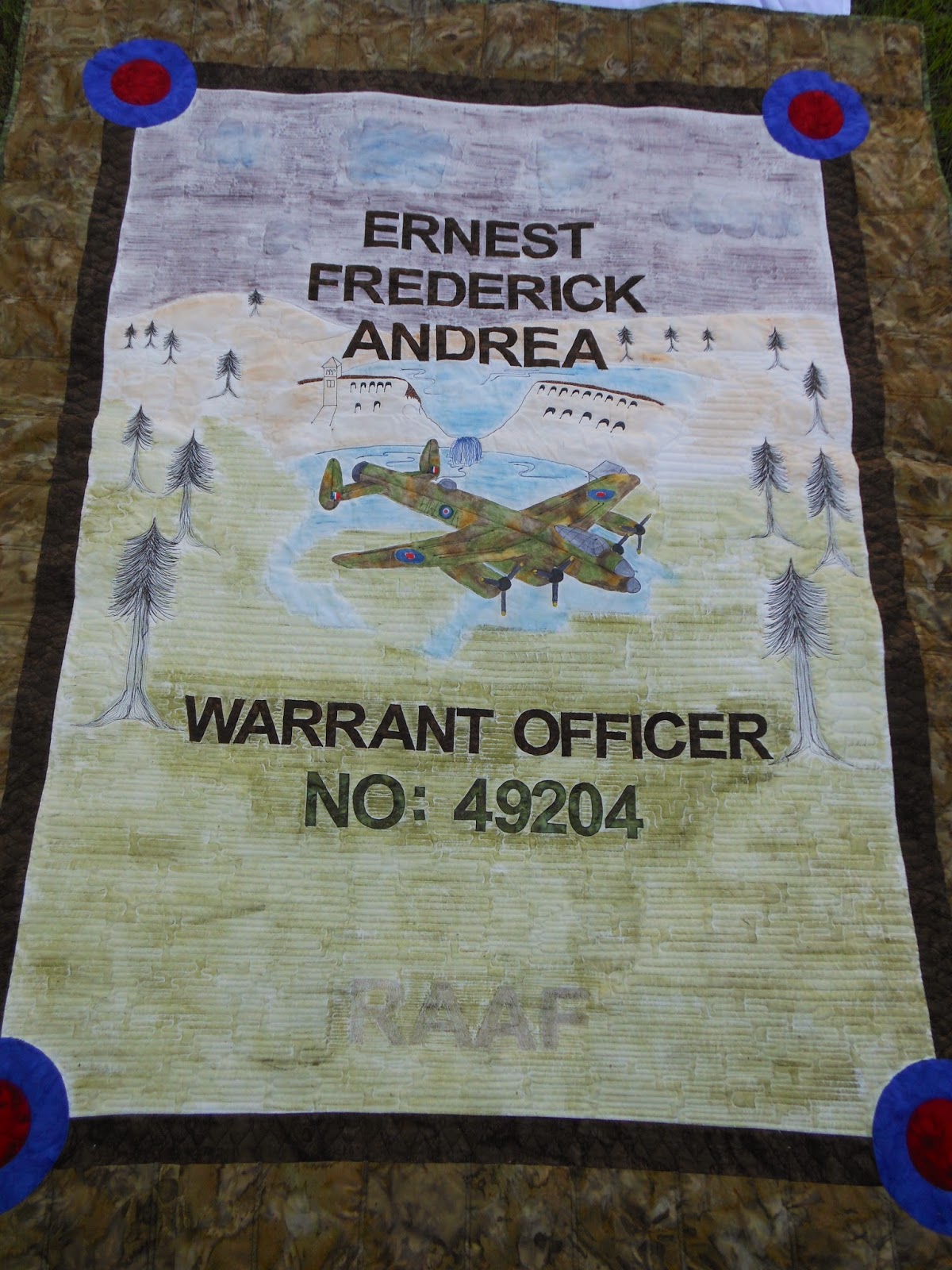 With the quilt handed over, I can do the big 'reveal' and show you it finished. I have to admit, when I first had this commission mentioned to me, I immediately thought, what's a Lancaster plane look like?? Well, after a bit of searching on the Internet, I not only found out what they looked like, but also specifically what they were used for. The history of the Lancaster is quite interesting. If you've heard the expression, 'The Dam Busters', you've already ventured into the Lancaster fly zone!
The design brief for this quilt was, 'Can you do a Lancaster plane quilt? 'Can you also include an Oxford and a Tiger Moth?' The rest was left up to me. So with minimal details, in my head I set about designing this quilt, that would eventually end up on an ex Lancaster pilots bed.
With the Lancaster to go as the central plane on the front and the other two to be incorporated as a small design on the back, I had to find a secondary picture that would become the background imagery behind the Lancaster. 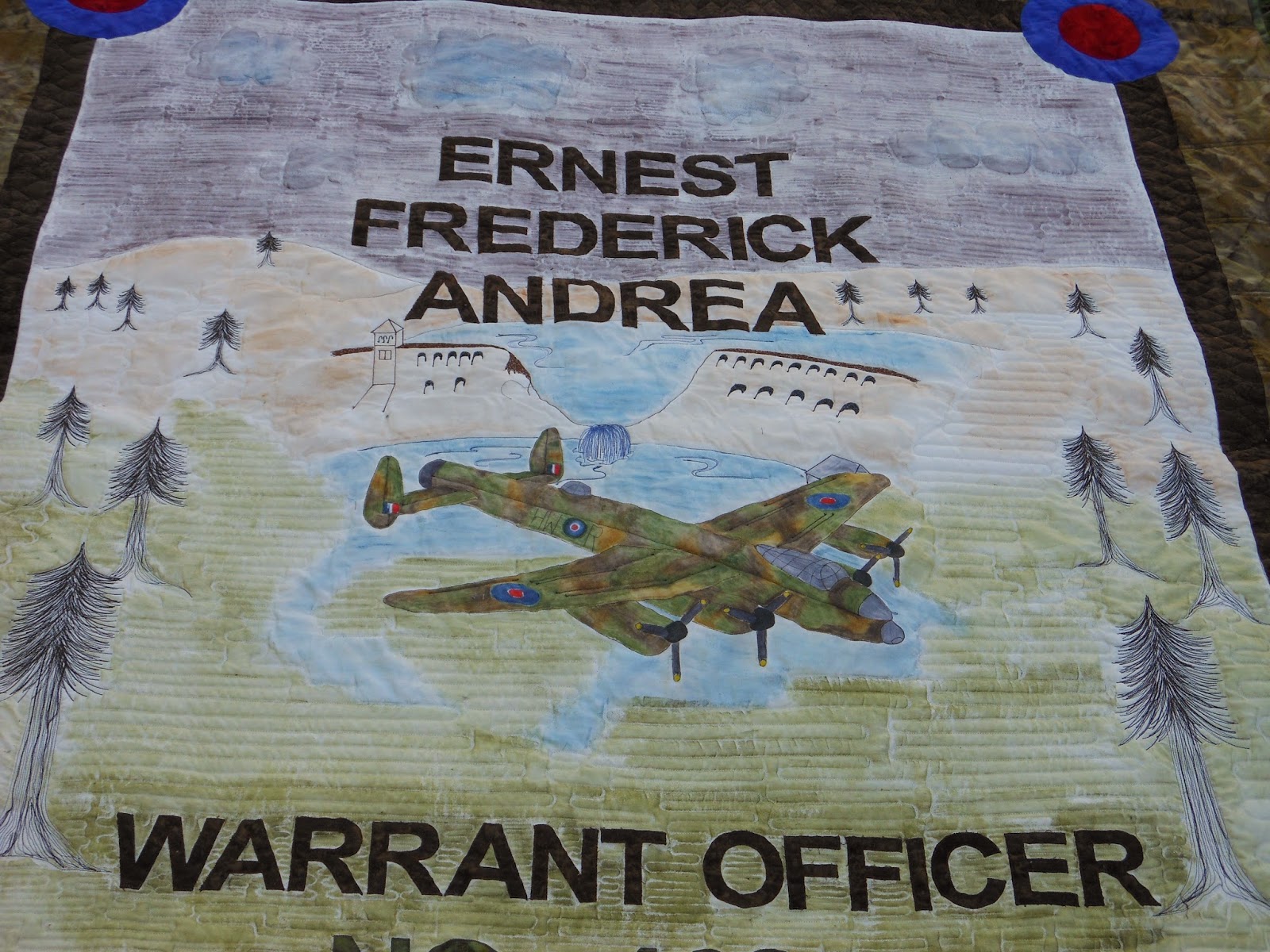 I decided it would be appropriate to depict a dam, as the Lancaster was used specifically for bombing dams. Without wanting that part of the picture to overshadow the plane, I thread painted the dam onto the quilt. I think I have found a new love with thread painting. But boy, do you go through the thread at a rapid pace with this technique!!
Some other details I added to personalise it, were the gentleman's name, rank and serial number.
From the start of the making of this quilt, I had decided that I would 'grubby' up the background. I did have someone express their concerns about this phase of the quilt making, but when I actually mentioned it to the man that commissioned it he said, 'Do whatever you need to. I know you know what your doing'. With that assurance of confidence in my idea, I got right into turning that stark background into something a bit more real with colour. The Inktense pencils, were the easiest way for me to do it, as I'm no painter naturally. I really like the affect it has given the dam wall. Makes it more 3D like. 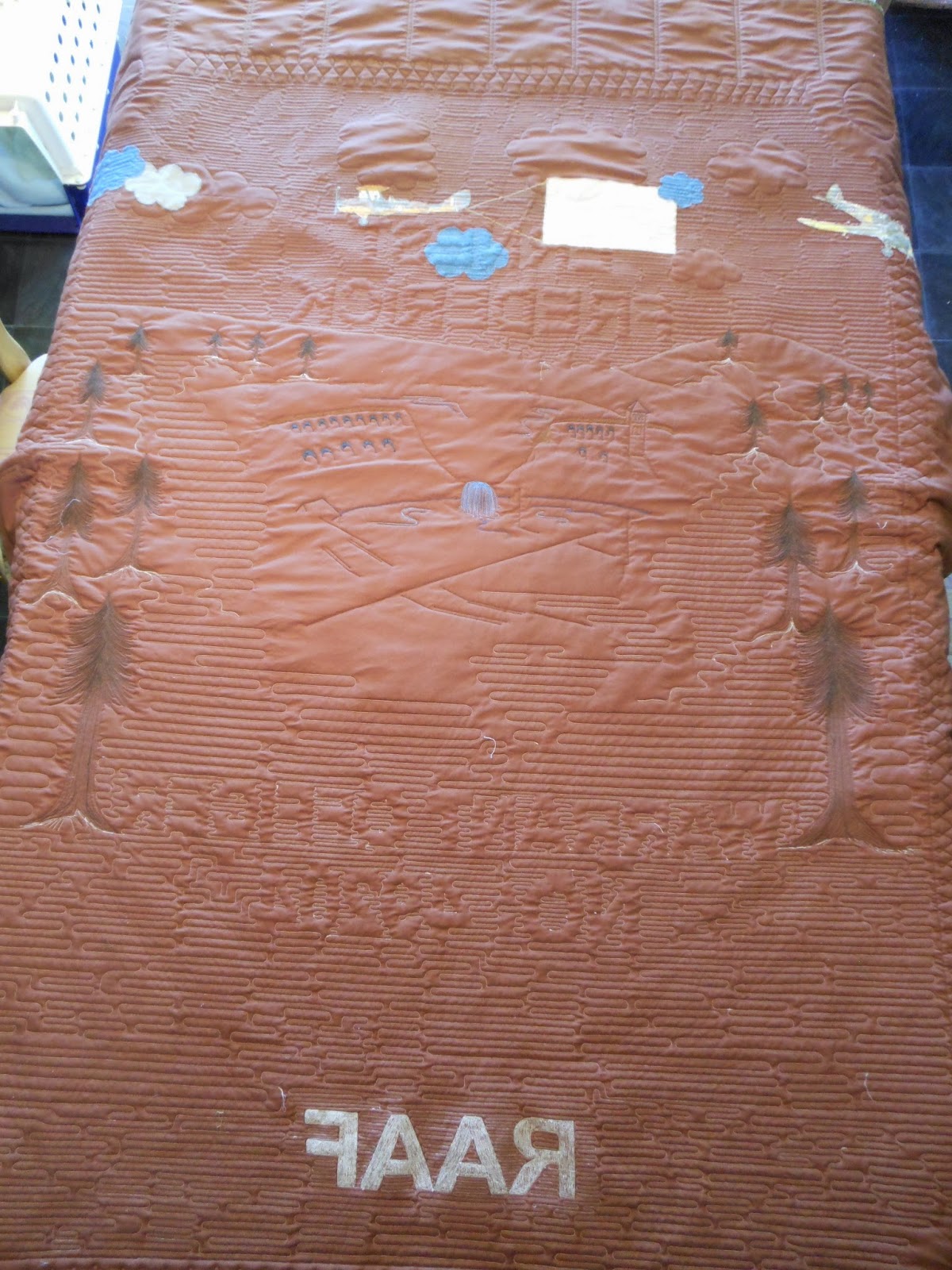 It's a bit hard to see, but all that quilting did make a picture on the back. When I handed over the quilt, the gentleman that had ordered it said, 'Wow, look, there's even a picture on the back!' And then he noticed the flying planes and clouds at the top. The cream square you see is the label where the details of the gift were written by the family that commissioned this quilt. The RAAF, while easily seen from the back, is only hinted at on the front.
I have to admit, this quilt stretched my idea base, as I had not previously done before such a specific masculine quilt. And the reward was, the day after this quilt was handed over, I received a lovely text message from the gentleman that commissioned it expressing his appreciation for the work done. (which is always a relief, when you know they actually did like it and weren't just saying it)
That's it for now, onto the next project.-Julie.
﻿ 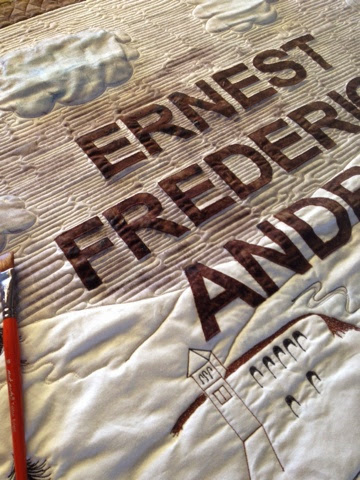 It's taken a while to get to this point, but I'm finally here!! (Insert relieved sigh) One of the final steps I had to do with the Lancaster quilt, was to give it a light ink wash over the top. The quilt front was rather stark and from the beginning, I had in mind to ink wash it, to 'dirty' it up a bit. As this quilt is for an older gentleman, in keeping with the masculine colouring I felt a stark cream background wouldn't be it's best look. After inking the entire front, I'm very happy with the results. It's even given one section of the quilt picture, a more three dimensional look than it had before. Definite Bonus!!! When it's done drying, I'll post final pictures of the finished quilt. Until next time.-Julie.
Posted by Heritage Keepsakes on Wednesday, March 19, 2014 2 comments 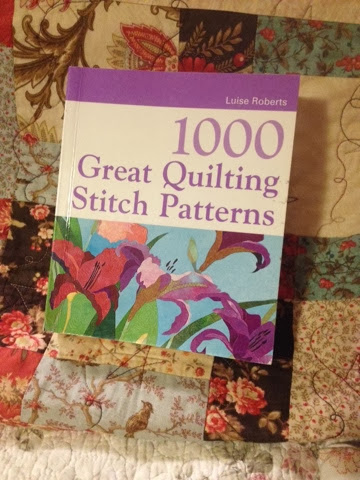 I happened to be at the home of another longarm quilter on the weekend and spotted this book under her table. With it's title, it immediately grabbed my attention and after flicking through it, I realised I needed my own copy. A quick look on the internet and I found one. If you are a machine quilter, you will love the huge selection of quilting designs this book has to offer. Even if you don't use them exactly as they are presented, it will give you plenty of design possibilities to consider. It's definitely a valuable addition, to any quilters library!
Posted by Heritage Keepsakes on Wednesday, March 12, 2014 1 comments

Finally, with my computer issues worked out, I can give you the story of Swoon... 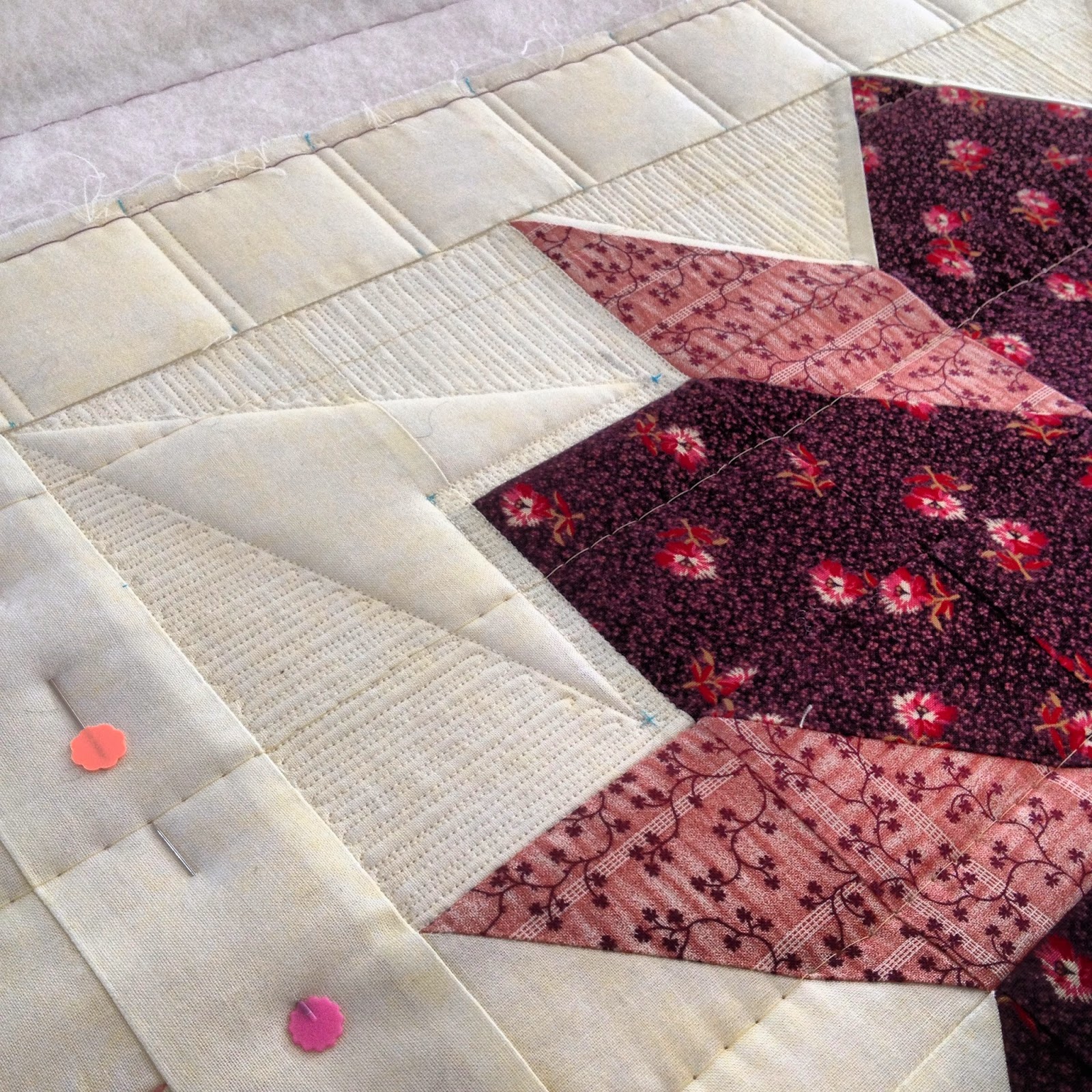 Swoon (by Camille Roskelley), was started about a year ago. Construction stalled and Swoon was then packed away, until I could be bothered facing it again. After I got back from America late last year, I decided to get it out and try and get it finished. I had a hair brain idea for it and needed to get it finished quickly!
I have to admit, I hate the pin basting that needs to be done to a quilt. A friend in the valley, (Thank you Lyn King) suggested to me to just machine baste, so as to minimise the pin basting required. What a brilliant idea!! This photo looks a little grainy, as it's from my phone. 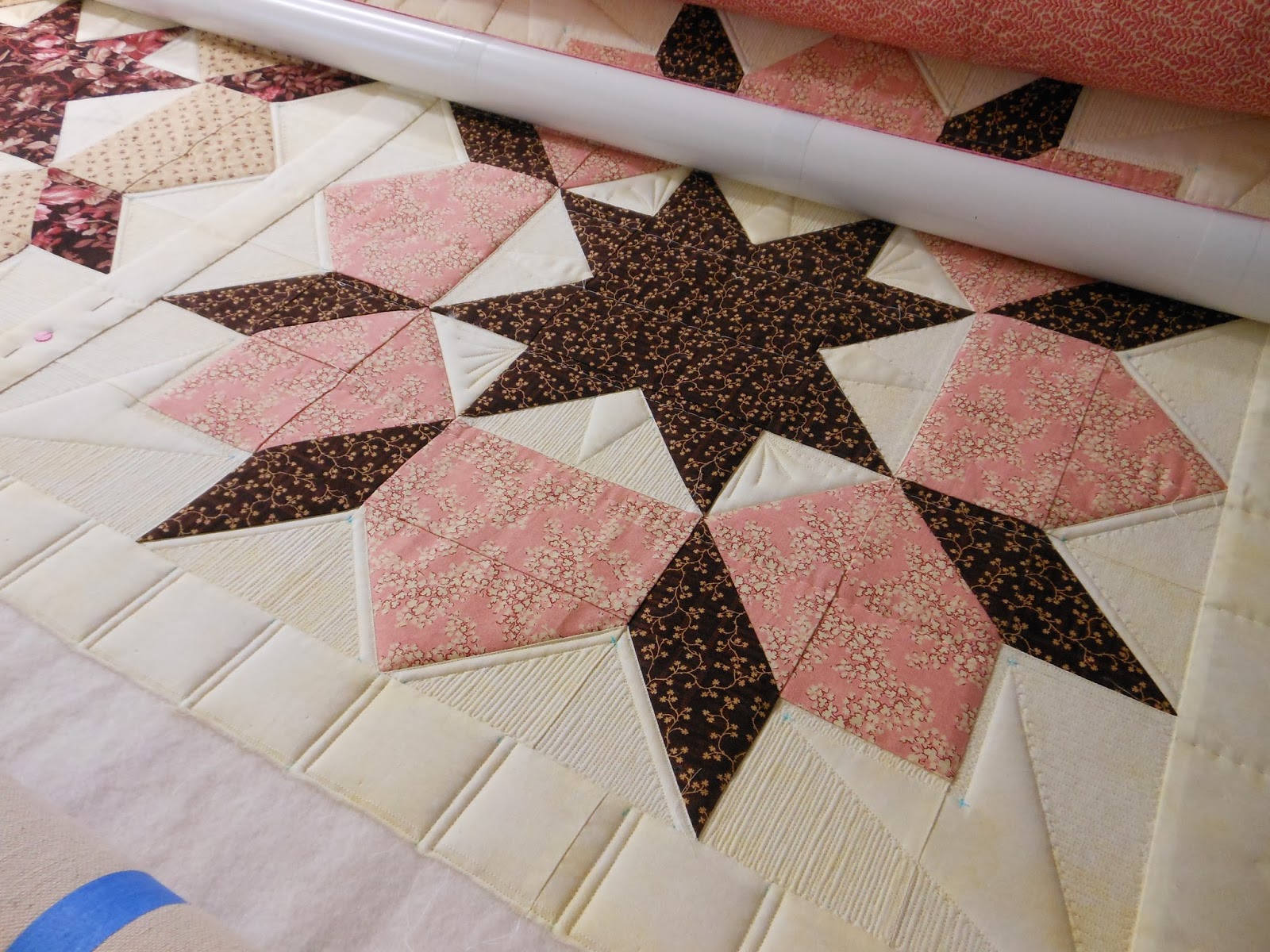 This quilt did in fact start off destined to be on my own bed. In the process of construction, someone approached me wanting to purchase it. With Swoon sold, work on it proceeded at a steady pace to get it finished. Bead board in the borders and ruler work in the blocks, became the main design elements I chose. I have to admit, I love the fact the quilting can add a secondary design element to a quilt. 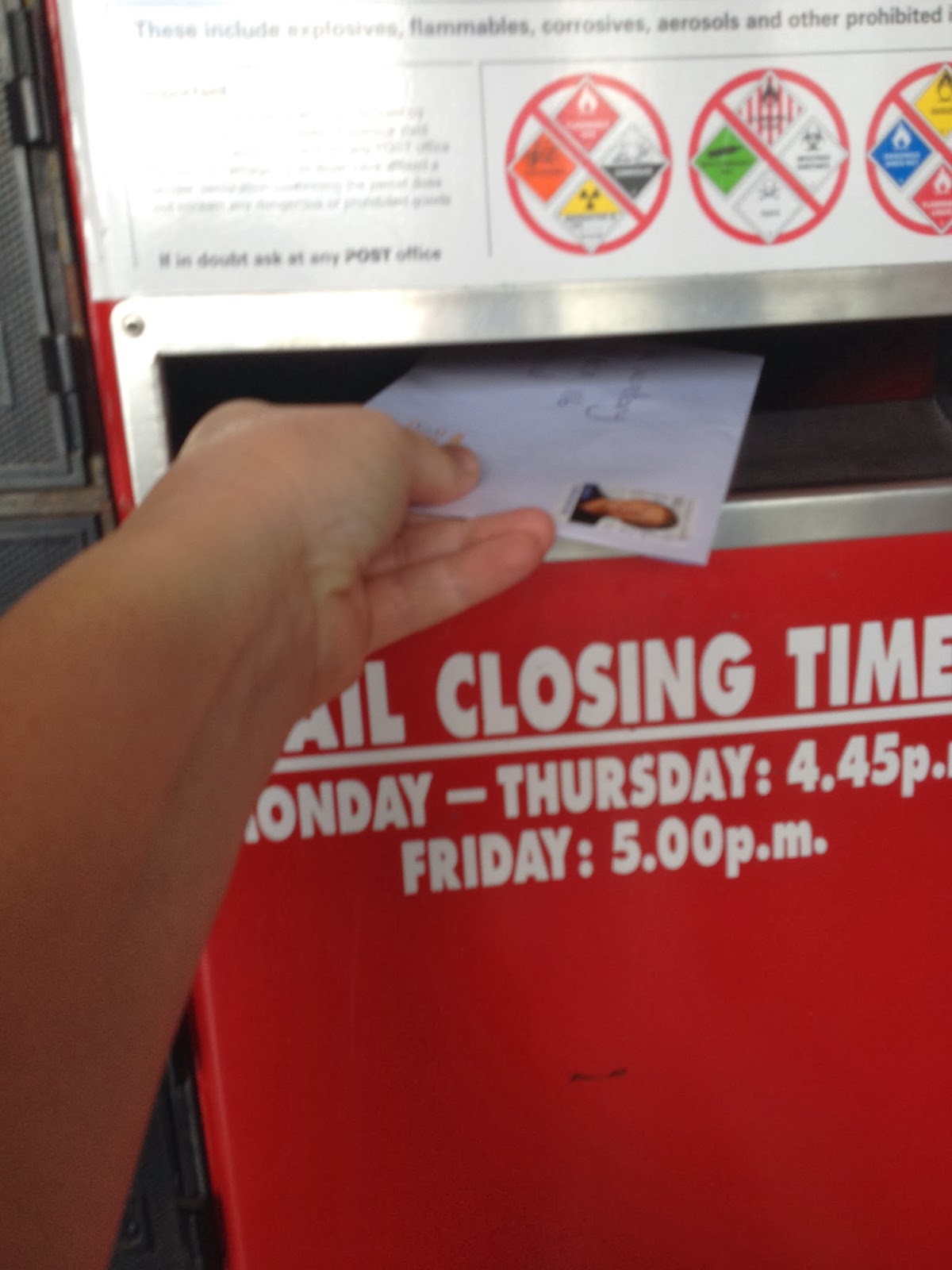 When Swoon was gotten out to be finished late last year, I decided I would also enter it into a show! The deadline for the show entry was February 21st and so I entered, with Swoon not even off the frame yet! 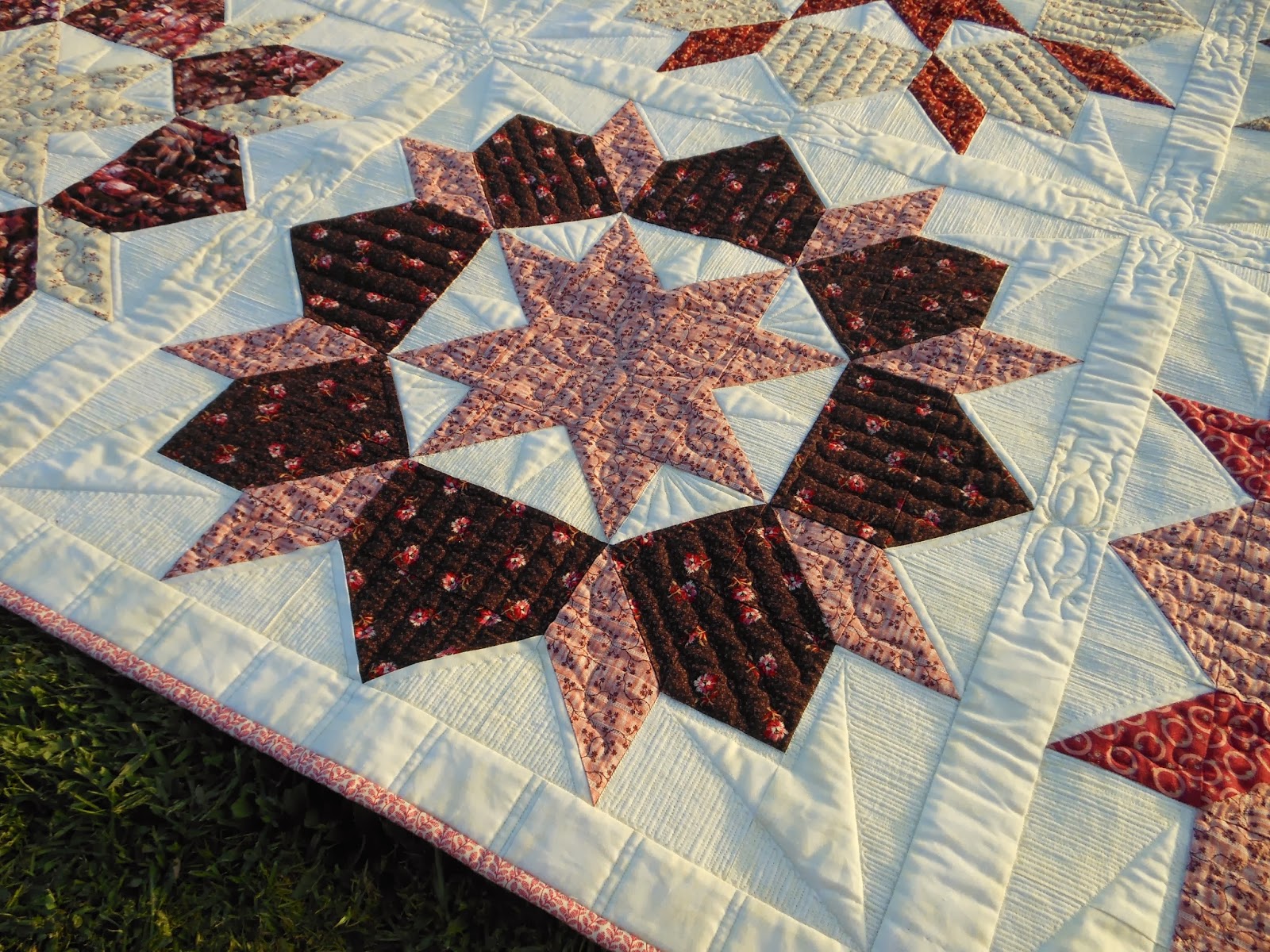 After many many hours of quilting this (approx. 40), I do like the end result. I have quilted a similar design before on a quilt, so when it comes time for me to do my own Swoon, I will use some of the same quilting designs again. There a few new things I want to try as well!! 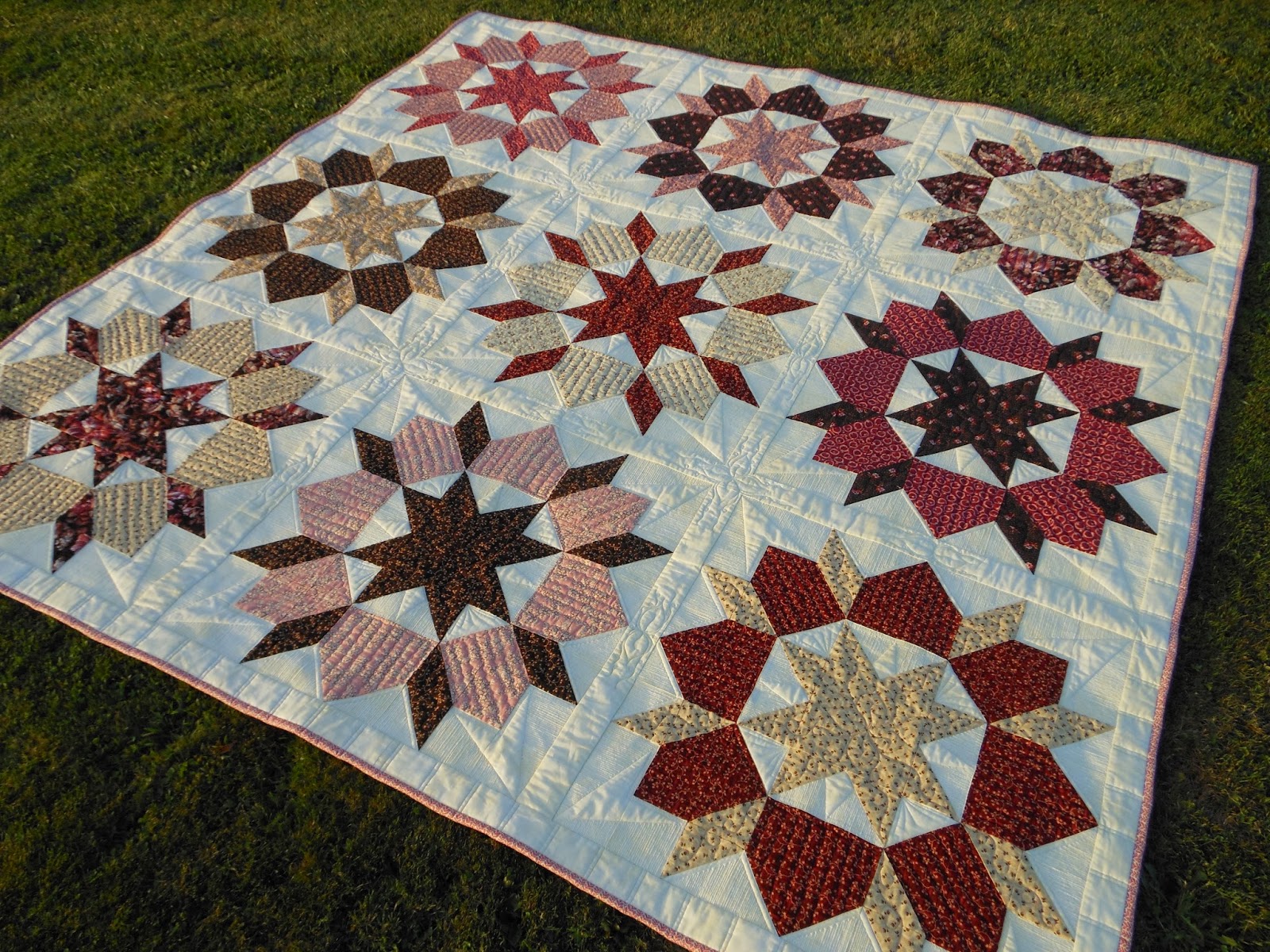 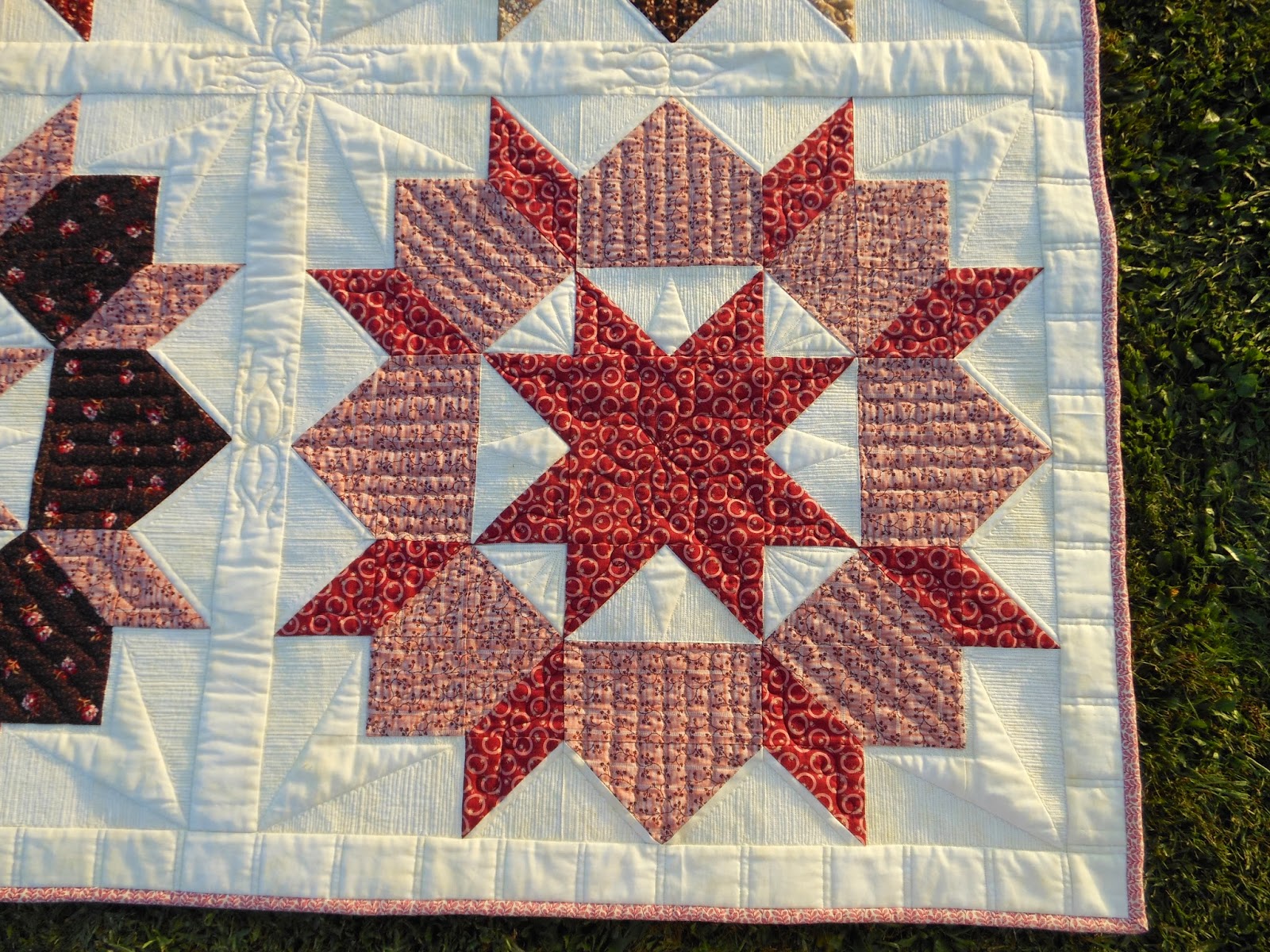 This pic probably gives a better close up of the quilting. It is square, despite it looks otherwise. Lumpy grass underneath!! 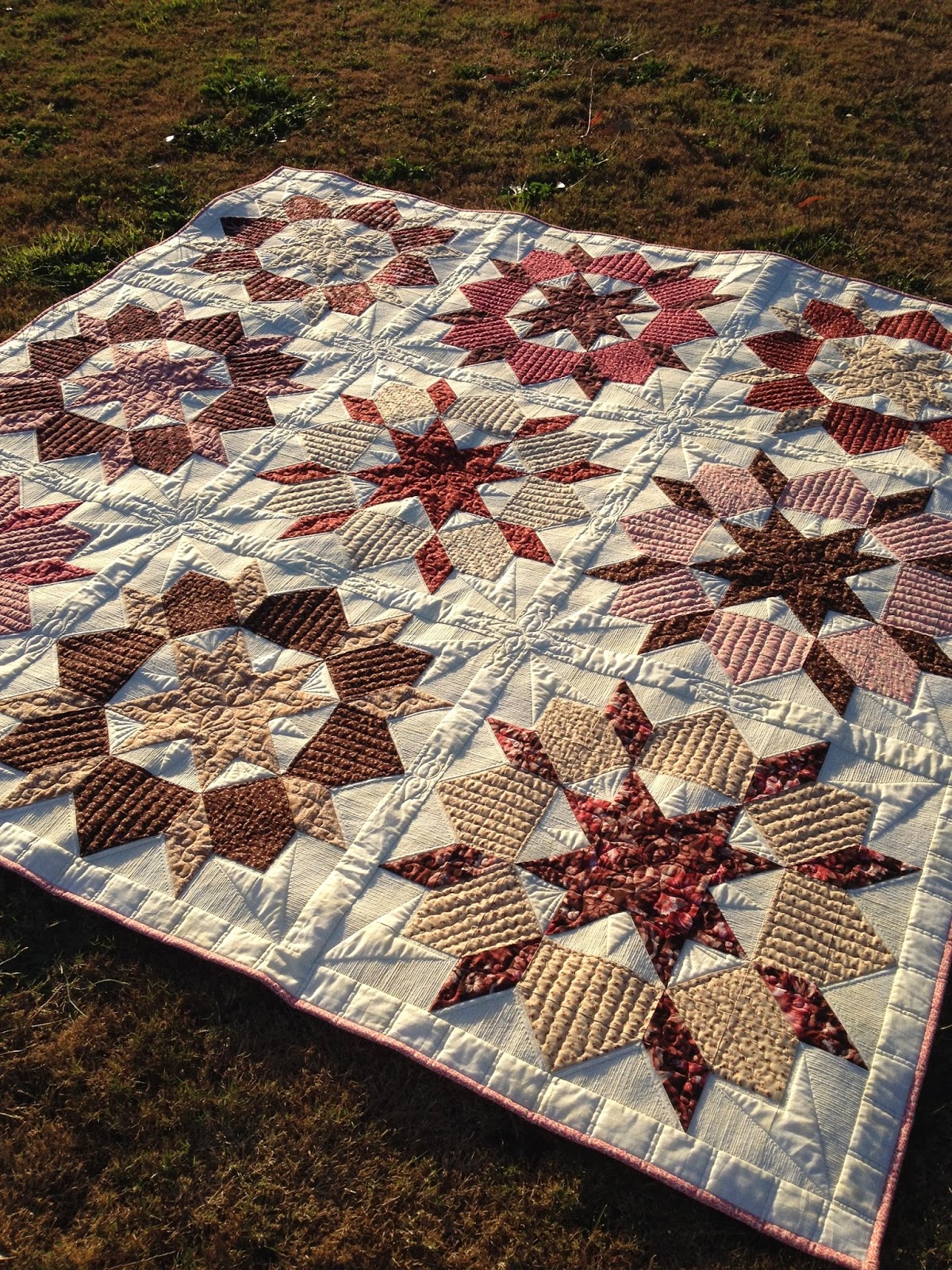 Swoon finished and ready to go to it's new owner. My own Swoon... I'm planning a totally different colour way the next time! 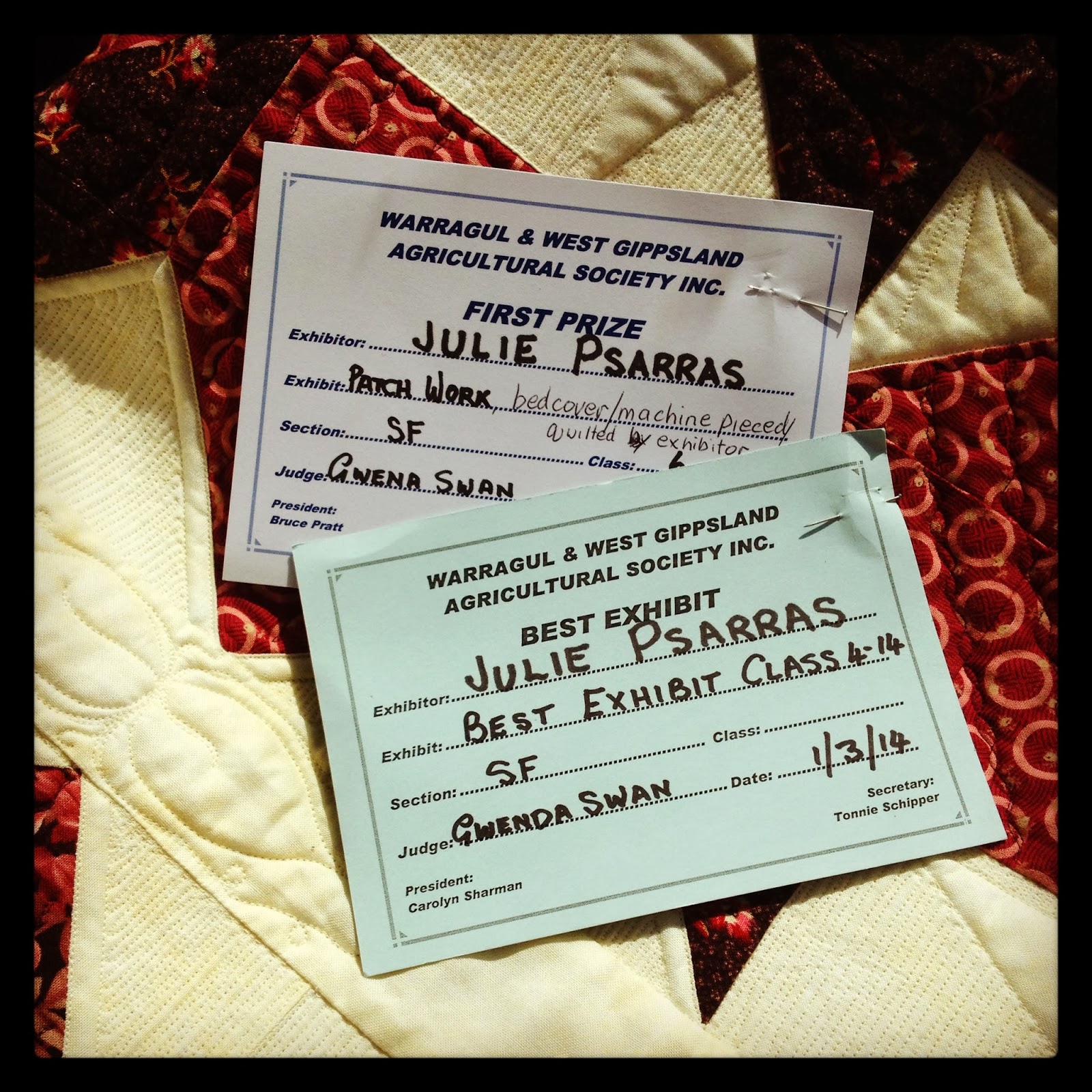 And the results from the show? Swoon placed first in it's class and then won best exhibit in the patchwork/quilt classes. While no ribbons were awarded for these places, the wins did provide a nice little cash award.
Onto the next project!-Julie.